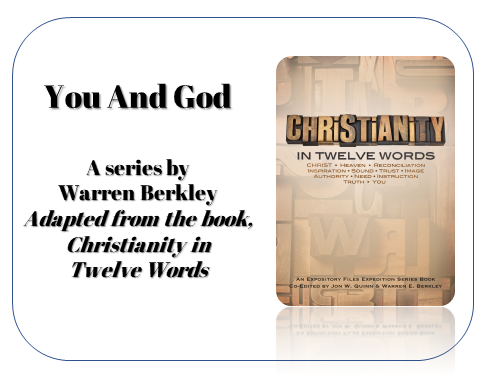 Adapted From the book CHRISTIANITY IN 12 WORDS,

Over the next several days, I’m publishing a brief series called YOU AND GOD. This is adapted from the published work of Expository Files, CHRISTIANITY IN 12 WORDS.

God seeks a personal relationship with every single person! By that I mean – not just God knowing who you are, but God knowing you as His child like a parent knows his or her children.

When I speak of God wanting to know us, please – let’s be clear. It is not about a little dot on a globe. It is not like your name in a database. It is not that you are in a group that He is acquainted with. This is about God knowing you personally and knowing you as His child!

The Bible clearly teaches, God wants that! What an amazing thought I want us to ponder soberly. It is written that God wants to know you, as His child.

God’s interests in His creatures is declared on the opening pages of the Bible.

Then God said, “Let us make man in our image, after our likeness. And let them have dominion over the fish of the sea and over the birds of the heavens and over the livestock and over all the earth and over every creeping thing that creeps on the earth.”

So God created man in his own image, in the image of God he created him; male and female he created them. – Genesis 1:26,27

This declaration is never said of plants and animals. And to this add, that the Lord God formed man from the dust and breathed into his nostrils the breath of life, and man became a living creature (Genesis 2:7-9), likewise never said of plants or animals. And in Genesis 2:18, the Creator saw that Adam was alone and needed suitable companionship. God cared about that. God said, “…a man shall leave his father and mother and hold fast to his wife, and they shall become one flesh,” (Genesis 2:24). Special care of His human creatures evidenced again.

As the human race grew out of the garden and people filled the earth, God knew each one and cared for the welfare of His human creatures. He wanted the people He made to come to Him, serve Him and walk with Him.

God gave attention and care toward human beings, far different from His treatment of plants and animals. He gave Adam and Eve a special, perfect place to live. He put them in the garden and provided for them abundantly, having a relationship with both.

And for a time Adam and Eve knew God in a close, personal way experiencing the joy of knowing their Creator. God spoke to them and they listened. God gave them what they needed, and they received from His grace. They enjoyed His presence, His Help and His fellowship. But that relationship changed when they broke away from Him through their disobedience.

When Adam and Eve sinned – it is apparent in Genesis 3, that God was displeased. And, that their sin disrupted their relationship with God is obvious. Serious consequences came. But while there was justice and penalty, there was grace and care and no interruption in God’s love for them or His interest in their obedience. He wanted them to repent and come back. God spoke to them about their sin, and He wanted them to return to Him.

Further into Genesis and the theme is repeated, that God seeks a personal relationship with every human being. When Cain killed Abel, God said, “What have you done?” In the case of Enoch and Noah, God was pleased to have people walking with Him. God sought to be a friend to Abraham. Later in Genesis – concerning Joseph – the Bible says the Lord was with him.

What do you think we should learn from this history in Genesis? Isn’t it plain: God seeks a personal relationship with people. Enoch walked with God. Noah found grace in the eyes of the Lord. God cares; care that can be called perfect grace.

We were never meant to be without God in our lives. You are not like just another rock, or a limb on a tree. You are more than just that speck on the globe or that member of a large group. You are a person made in the image of God. He knows you! Do you know Him?

He wants you as His child under His care – and there is no higher or better care than to live as a child of God, reflecting His glory and grace. He wants that! Just as children need parents – YOU need God.

God would not create you in His own image, then treat you like one of a group of plants or animals. He wants you to come to Him. Why else would He conceive and reveal a plan of salvation? Next, to the gospel of John.